One would be hard-pressed to find a newspaper or website not reporting the latest headlines from Prime Minister’s question time. Some cynics have too often described movements such as #MeToo as a fad while others with a less pessimistic disposition see the current political climate as a timely wake up call. The most recent development in the battle to tackle sexual harassment in the workplace is the Government’s promise to take action over the inappropriate use of non-disclosure agreements (NDAs) in both employment contracts and settlement agreements alike.

During last week’s Question Time, Theresa May hit out at the “unethical” use of non-disclosure agreements after a ruling by the Court of Appeal stopped a national newspaper naming a leading businessman at the centre of sexual harassment and racial abuse allegations. The businessman in question was later revealed to be Sir Philip Green. The Prime Minister’s comments come circa ten months after the Government first promised to look at the use of NDAs in the wake of the Financial Times’ revelation concerning the behaviour of some guests at the Presidents Club Charity Dinner.

The Court of Appeal ruled that the five employees who had made allegations against the businessman had been given “substantial payments” under settlement agreements which contained NDAs and this “compromised” their complaints.

To summarise, the present position we as a nation find ourselves in is that the current law (which allows for the misuse of NDAs) permits the wealthy and powerful to silence victims of sexual harassment.

The case before the nation this week is clearly not what had been intended for NDAs in employment contracts and settlement agreements alike. However, it seems that rather protecting the goodwill of a business and its clients, some businessmen are using NDAs instead to safeguard their reputation (and liberty).

The legislature is now showing commitment to outlaw these gagging orders that bar employees from reporting sexual harassment they face in the workplace. In particular, proposals included in the draft Domestic Abuse Bill state that companies will no longer be able to enforce NDAs to silence employees in cases where allegations of sexual assault amount to a crime. This would include a wide range of incidents from unsolicited touching to rape.

With these proposals, employers could face a further legal duty to protect their staff from unreasonable behaviour of a sexual nature in the workplace. Alongside these provisions, the Government have indicated that a new national database will be set up which would enable employees to report complaints of workplace sexual harassment more efficiently. However, an outline of the practicalities and potential sanctions have yet to be defined.

Some commentators fear that these reforms may not go far enough and urge the government to ensure that any new legislation categorically outlaws the use of NDAs to obstruct reporting of any form of personal abuse at work, and not simply limited to abuse of a sexual nature.

It has yet to be seen how effective the Government’s reforms will be. However, given the events of the last 12 months and the rise (and rise) of victims finding their voices, it is clear that the government’s plans will need to be robust in ensuring employees are no longer silenced.

We seem to hear a lot about non-disclosure agreements these days. They're also known as NDAs or "hush agreements" and rich and powerful people including Sir Philip Green, Donald Trump and Harvey Weinstein are believed to have used them. An NDA - or non-disclosure agreement - is a contract between two groups or individuals so that information is not made public. They can be used when an employee leaves a job, so what they know can't be used against their old employer. Yet what happened with film producer Harvey Weinstein, showed how powerful individuals have been able to use money to cover up allegations of sexual misconduct. Mr Weinstein, 66, has previously insisted via his lawyer that he has never had non-consensual sex. 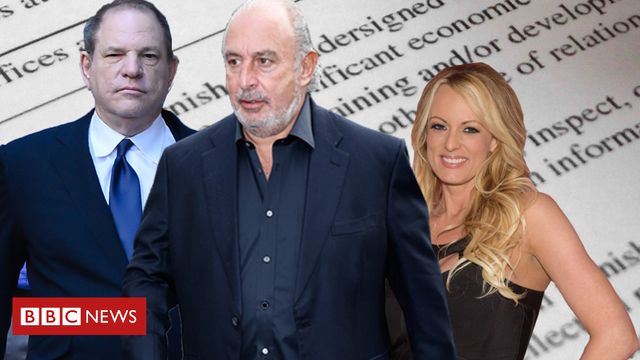 Sir Philip Green, other famous faces and why NDAs matterhttps://t.co/MsSZp6vOIU

Gender diversity in the law
Anonymous

The gender pay gap saga does not look to be dying down any time soon.
Anonymous